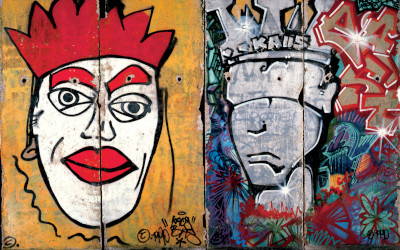 The installation of the Berlin Wall panels is a popular one on the UVA grounds since it is visited by almost every tourist, visitor, and new student. The installation is located in a very prominent and busy space, right by Alderman library and the Albert and Shirley Small Special Collections Library. It is, in fact, such a familiar sight that hundreds of students hurrying past it almost every day barely pay it a passing glance. An unbelievably powerful and striking historical artifact has been absorbed into the mundane surroundings of everyday life. We tend to take things we see around us for granted and as somehow being undeniably permanent. Very often we neglect to recall the particular histories that certain places or objects are a part of. It is easier still to remain ignorant of the multiple narratives that thread through the familiar space of our lives. The Berlin Wall installation provided the *UVA Reveal* team with the perfect opportunity to work through and reveal some of these layers and strands of history that continuously surround us. The Wall once snaked its way across Berlin for approximately 96 miles. What we have here is merely 16 feet of that enormous structure. Yet that is precisely where its significance lies: it is a fragment of a wall that once not just physically divided a city, but ideologically divided the entire world. The chipped and uneven edges of the panels declare them to be broken fragments of a much larger - and now no longer existing - structure. In effect, the installation gestures not toward what stands before us, but toward what does not. Virtual augmentation of the Berlin Wall installation could take us in several different directions. One such project by the Berlin Business Location Center has remapped the entire stretch of the Berlin Wall through 3D modeling using historic aerial images. This virtual tour allows the user to travel along the Berlin Wall and experience Berlin at a time when the wall was fully intact. While this might be an interesting project for several reasons, it also has the unfortunate consequence of raising the wall again, albeit virtually. Another example of a project is the Tilt Brush tool developed by the *NOVALIS VR Project* in which virtual spaces of historic sites, for example the Berlin Wall, are accessible for users to draw and sculpt on. This would allow users to paint their own graffiti on the Berlin Wall and thereby virtually participate in the spirit of public solidarity and of creative defiance in the face of institutional and political divisiveness. For *UVA Reveal*, we decided to explore the history and the aftermath of the fall of the Berlin Wall through virtual augmentation. The augmentations highlight the public protests that ultimately brought down the wall, the speeches by Presidents Reagan and Kennedy, and the status of the wall in the present day. The last is perhaps most striking. An interactive map published in the article “Where on Earth is the Berlin Wall?” on The Guardian lists almost all the locations across the world where sections of the Berlin Wall are currently installed. Brightly and gaily graffitied fragments of the Berlin Wall link disparate places on the globe in remembrance and recognition of the strength required to pull down walls that divide and fracture. So, what does it mean for such an artifact to stand on the grounds of the University of Virginia today? We leave the interpretation of our augmentation of the Berlin Wall open to the viewer. We only hope that it allows the viewer to perceive and recognize the familiar and mundane space around them as vitally dynamic and continuously challenging.